Award-winning family destination Blair Drummond Safari Park is gearing up to shine a light on their beloved endangered Madagascan primates in support of World Lemur Day on Friday 29th October.

Home to over 24 species on the IUCN ‘Red List of Threatened Species’ list, Blair Drummond Safari Park’s comprehensive breeding programme aims to support the recovery of species and to prevent more species being added to the list through proactive conservation efforts.

And it is proving to be a success.  Blair Drummond Safari Park recently welcomed a Red Ruffed Lemur baby from their established breeding pair, as well as quadruplet Black-and-White Ruffed Lemurs from the park’s breeding pair.

Operations Supervisor Fiona Carmichael said: “The birth of red ruffed and black and white lemur babies is extremely important. Both species are critically endangered in the wild, primarily due to hunting and habitat loss so to have such success in breeding is very significant. With so few wild lemurs left, genetic diversity is incredibly limited so breeding them in captivity is vital to ensure these wonderful animals do not become extinct”.

Visitors to Blair Drummond Safari Park can find out more about certain animals by downloading keeper talks from the Blair Drummond app. Codes at habitats can be scanned, providing detailed accounts of species and fascinating facts.

Fiona added: “Keeper talks are very popular with visitors, as they are a fun way to learn about species they may have never seen or heard of before.  It’s really important that they understand that by visiting they are supporting Blair Drummond’s conservation efforts and the threats currently facing animal populations in the wild”.

Blair Drummond Safari Park is a full member of the European Association of Zoos and Aquariums (EAZA) and works alongside other tops zoos across Europe in various endangered species breeding programmes. These breeding programmes aim to conserve genetically healthy populations of animals within zoos, in an effort to safeguard populations in the wild. Such programmes are vital to ensure the survival of many animal species, without which many would be extinct. 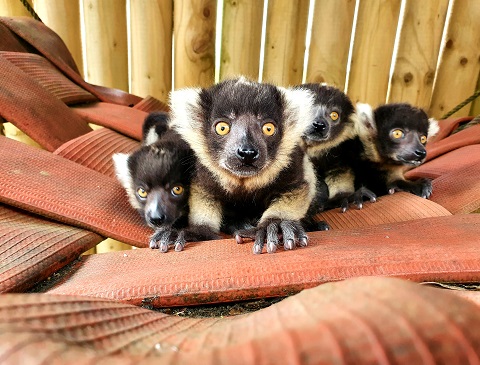