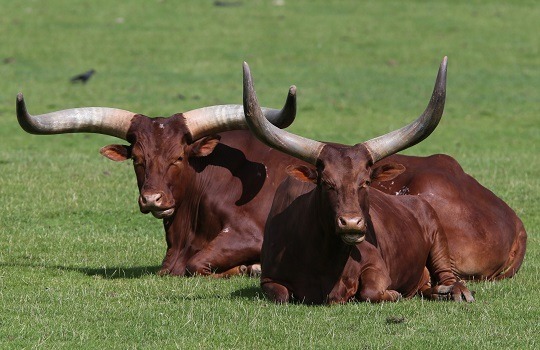 Ankole cattle can date their ancestry back more than 6000 years and have often been referred to as the “Cattle of Kings”. This reputation is partly due to the fact that only a few tribes in Africa work these cattle and very few use them for meat. Ankole are highly prized as status symbols and are often used for ceremonial functions or just to show off how rich a tribe or family is.

They are also used for milk production and in some tribes this is an important ritual. They are now found all over the world but are distributed in Africa from Lake Mobutu to Lake Tanganyika in Eastern Africa. During the day when the mother Ankole is grazing, her calf will sleep with an “auntie” cow for protection. At night the whole herd will sleep together with the calves in the middle so that they can be protected by the horns of the adults.  Males have shorter, forward-facing horns whereas the females’ horns curve upwards.  The horns act as radiators, dispersing heat via blood vessels that run through them.