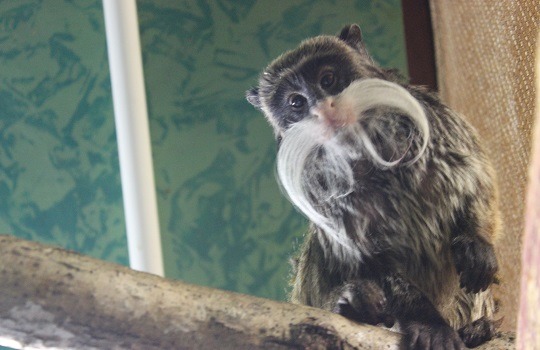 The most striking feature of this characterful little monkey is an impressive imperial looking moustache. They are very sociable animals, living in troops of up to 20 individuals, led by the dominant female, and often teaming up with another species, the Saddleback Tamarin. They spend much of their time grooming each other to reinforce social bonds and have a range of ways to communicate with one another, including frowning, staring and tongue flicking. If an Emperor Tamarin flicks his tongue at you it may mean he’s suspicious!

Due to their small size, the Emperor Tamarin has a number of predators within its natural habitat, including wild cats, dogs, snakes and birds of prey. However, their biggest threat is man, and populations are in rapid decline due to deforestation and habitat loss.