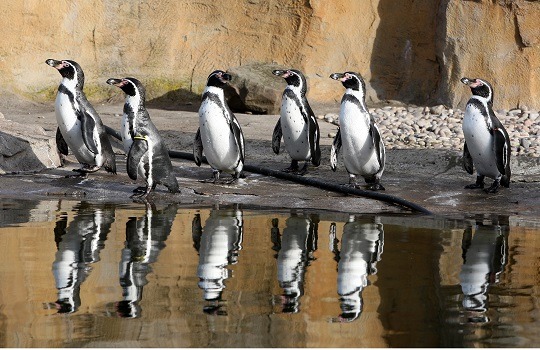 The penguin is one of the most graceful and streamlined swimmers there is, but out of the water it’s another story! On land, they do not perch but instead stand upright and move with a comical waddle.

The Humboldt penguin lives in small colonies along the west coast of South America, using the icy currents to hunt for fish and other tasty treats. When hunting, they will dive below the surface and effectively fly underwater, flapping their wings to provide power. Most dives last about a minute, but penguin dives as long as 20 minutes have been recorded!

Hunting and over-fishing by humans have led to a decline in Humboldt populations. They are also losing their nesting sites as people collect their poo (or guano) to use as fertilizer. Climate change is another worry for these little birds – as when water temperatures rise, it has a direct impact on their food sources.