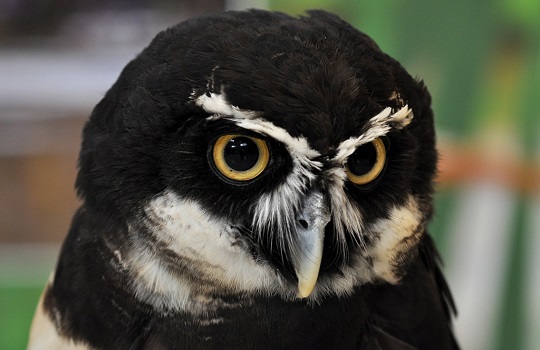 This large tropical owl gets its name from the ring of white feathers or ‘spectacles’ around its eyes. Mostly found in rainforest, it also lives in the edges of woodland and in coffee plantations. Instead of patrolling for its prey like many owls, the Spectacled Owl hunts from a perch, snatching prey from the ground or nearby foliage. It will conceal itself in the lowers layers of the forest and is more often heard than seen. It makes a series of low-pitched knocking sounds, like the noise of a woodpecker tapping. Females also emit a loud cat-like screech.

Spectacled owls are a monogamous species, forming long-term pairs, and will share the parenting of owlets, that stay with their parents for the first year of their life.  Numbers remain high but as with any rainforest species, habitat loss impacts populations, especially if their prey is affected.