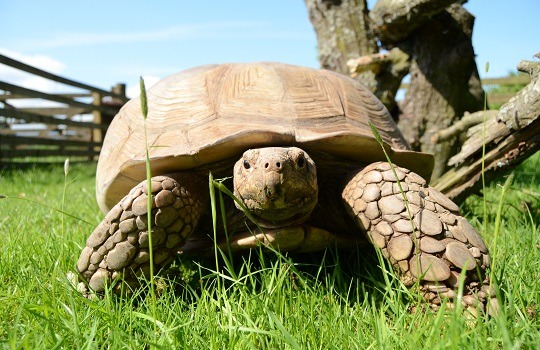 The sulcatta tortoise may be big but it’s also active and likes to burrow, climb and roam about in search of its food. Living in the Sahara, the sulcatta will spend the hottest part of the day underground in its burrow, which it digs with specialised claws.  As the sulcatta is a cold-blooded species, it will often spend mornings warming up in the sun before heading off to graze.

Sulcatta tortoises are very strong and have few natural predators. However, should a predator be spotted, withdrawing completely into their shells (leaving only the front of their scaled forelegs and the soles of their back feet showing) provides the perfect defence. Aside from its harsh desert environment, the biggest threat to the sulcatta comes from us, as it continues to be hunted by humans for its meat, shell and to fuel the pet trade.