This year’s baby boom has continued with the birth of three new kudu calves.  On the 8th of July, we welcomed a healthy baby boy named Kovu.  Little troublemaker Houdini was born next on the 31st of July, and baby girl Kiara was born on the 7th of August.  Our fourth and final kudu calf Lady was born on Tuesday the 30th of August. All four youngsters are doing very well and spend a lot of their time together.  If you are lucky, you may be able to catch a glimpse of them playing in our African drive-thru reserve.

The greater kudu is a woodland antelope that can be found throughout eastern and southern Africa.  They are one of the largest antelopes and can weigh up to 270kg!  The gruff bark they emit as an alarm call is one of the loudest sounds made by any antelope.

In South Africa, kudu dung-spitting (or Bokdrol Spoeg) is a traditional sport practiced by the Afrikaner community.  Contestants compete to see who can spit the small, hard, dung pellets the farthest.  The record currently sits at a whopping 15.56 metres! Not sure we’d fancy competing ourselves, but you can’t deny that’s a seriously impressive distance!

You can find out more about kudus here. 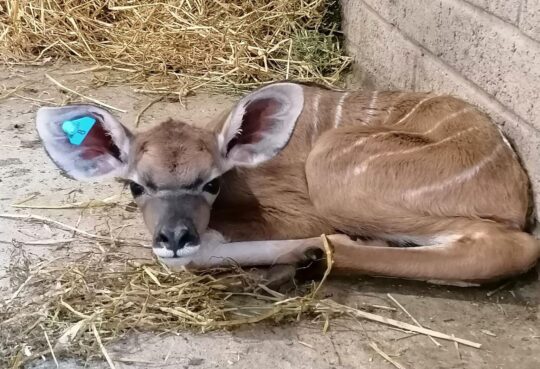 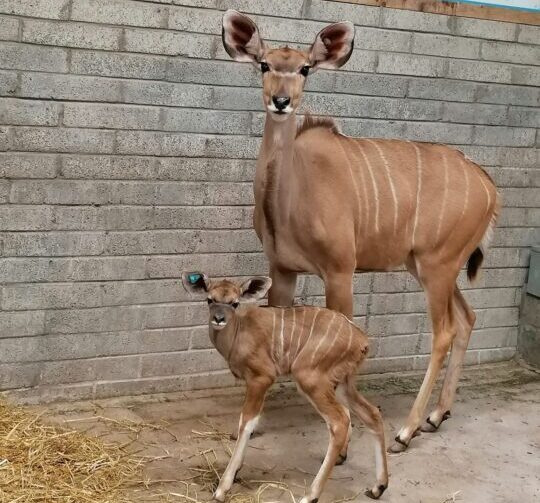