Last month, we welcomed a new baby Père David’s deer called Nancy to the world.  Nancy was born on the 29th of April and can be spotted in our Asian animal drive-thru reserve with the rest of her family.

Believe it or not, our herd of Père David’s deer are some of the rarest animals we have here at Blair Drummond Safari Park.  This is because they are now classified as ‘Extinct in the Wild’, meaning that they can only be found in captivity.  Père David’s deer were originally native to China but became extinct in the wild about one hundred years ago after floods and hunting wiped them out.  This unique species is named after Père David – a French missionary and zoologist who discovered the last of the breed in the Imperial Park in Beijing in the late 1800s. The Chinese Emperor then agreed to send a number of these animals to Europe, which flourished in captivity.  The most successful captive population was maintained by the 11th Duke of Bedford, who was able to successfully breed the deer on his estate and build up a large herd.

Thanks to this decision to move the remaining deer into captivity, the population has increased and the deer now number in their thousands!  In 1985, a small group of Père David’s deer were released into a protected park in China, back in their homeland for the first time since their extinction.   This small group was donated by the duke’s great-grandson, the 14th Duke of Bedford.  All Père David’s deer alive today descend from the duke’s original herd.

In Chinese, their name translates to “none of the four.” This name comes from the distinctive looks of the animal, which some people say look a bit like a cow, a deer, a horse and a donkey, but at the same time none of the four!  They are also unique in that they are semi-aquatic animals, spending long periods of time standing in deep water.  To accommodate this, their hooves are actually webbed to help them push through the water as they swim. 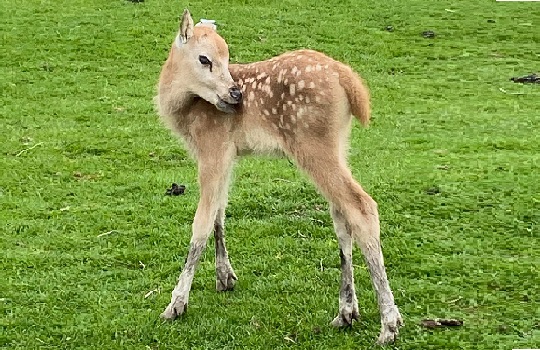