We’re delighted to welcome a new addition to California Cove.  We introduced Luce (pronounced Lucy) to our resident sea lions on the 30th of November.

Five-year old Luce joined us from Zagreb Zoo in Croatia, and seems to be very pleased with her new surroundings thus far.  Within a few hours of arriving, she was already out and about exploring her new home.  Introducing any new animal into an established group can be tricky, so we’re delighted that Luce has settled in so quickly.

Sea Lion Keeper Jen Carpenter said, “While Luce gets on well with every member of the group, she has become particularly close with our six-year old female, Ineke.  Ineke and Luce are already firm friends and like to do most things together.  They even snuggle when they sleep.  This is exactly the behaviour we hoped to see from these two, as Oscar and Poppy are themselves very close.”

Luce will eventually assist Oscar, Poppy, and Ineke in delivering our regular programme of sea lion training displays.  For now though, there may be some changes to our daily schedule. 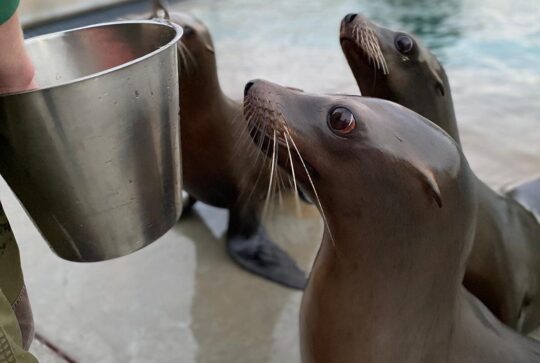