We’re so delighted to announce that Dot, one of our beloved southern white rhinos, has just given birth to her sixth calf – a beautiful baby girl.

Our adorable new arrival was born on the 17th of October at around 11.30am.  Although it’s still early days, mum and baby are both doing well. As an experienced parent, Dot has adapted to being a mum again very quickly, but we’ll continue to monitor the pair closely in the coming weeks.

Operations Manager Dave Warren said: “The birth was very straightforward, from her waters breaking to delivering the calf took less than two hours, we were slightly anxious as she came back legs first but there were no complications. It was such a privilege to be on hand to witness the birth. All our keepers at Blair Drummond are fantastic, and the large mammal team should be unbelievably proud of their achievements. They provided everything for Dot, leaving me with the fortunate job of taking photographs of our lovable new calf.”

For the first two or three weeks, mum and baby will be kept separate from our other female Tswane, and the calf will not be introduced to her father Graham until next spring. This is to ensure that everyone gets to know each other gradually and the calf is accepted fully by the group.

“We’re delighted to welcome the latest addition to our family. Dot is proving to be a great mum once more, and the baby is already up and about. We are so proud of the work we do to safeguard the future of this iconic species and adding another little one to their number feels amazing.

Southern whites are currently classed as Near Threatened after being brought back from the brink of extinction through a century of dedicated conservation efforts.  A hundred years ago they were already thought to be extinct!

Here at the park, we’re part of the EAZA Endangered Species Breeding Program, which is an initiative designed to expand and maintain healthy rhino populations.  Through this program, Dot and Graham have produced six calves who now live in safari parks and zoos across Europe.” 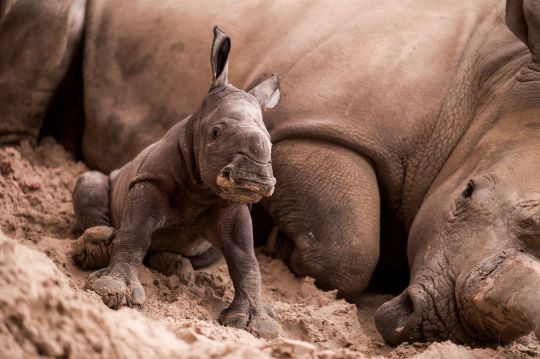