It may sound like the stuff of science fiction, but in a recent study by Species360 Conservation Science Alliance that the park has been involved with, scientists may have uncovered the secret to eternal youth! And who has helped us make this amazing discovery? None other than our 37-year-old Giant Sulcatta Tortoises Monty and Mali.

In the new study, researchers used data contributed by Blair Drummond Safari Park, in collaboration with other zoos and aquariums, to examine 52 species of turtle and tortoise. The data recorded enabled researchers to discover that, unlike humans and other species, turtles and tortoises defy common evolutionary theories and may reduce the rate of their ageing in response to improvements in their living conditions. Wow!

Amazingly, out of 52 turtle and tortoise species, 75% showed extremely slow ageing, while 80% had slower deterioration than modern humans.

“We find that some of these species can reduce their rate of ageing in response to the improved living conditions found in zoos and aquariums, compared to the wild. In addition, modern zoological organisations play an important role in conservation, education and research, and this study shows the immense value of zoos and aquariums keeping records for the advancement of science.” 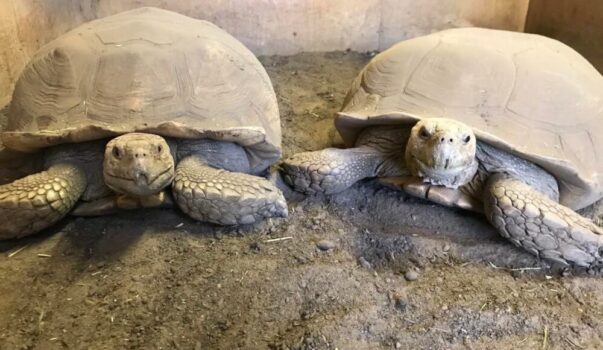