Our adorable new arrival was born on the 17th of October at around 11.30am to parents Dot and Graham, both 22 years of age.  After a straightforward birth, lasting just under two hours, Morag was born with no complications and was up and moving around another hour after that. At birth, baby rhinos typically already weigh between 40 to 60kg – almost as much as a human adult.

Weighing a rhino calf, however, is not as simple as it may sound.  Our large mammal keepers began Morag’s training for this process as early as her first week, and happily it is a skill that she has now mastered. This process was taken entirely at Morag’s own pace and involved acclimatising Morag to the scales and building trust with her keepers.

Large Mammal Keeper Alex Wainwright said, “At the time of taking her weight this morning, Morag was sitting at 149kg, meaning she has more than doubled in weight since she was first born.  This increase is in line with the milestones we would expect to see with our rhino calves.  Capturing these measurements is vital in ensuring that our animals are healthy, eating well and growing at an appropriate rate. Weight is an especially important indicator of health and wellbeing, and we are delighted that Morag is growing as she should.”

149kg might sound like a seriously impressive weight, but Morag still has a lot of growing to do to measure up to her mother who weighs in at just under 2 tonnes!

Morag is the sixth calf to be born at Blair Drummond Safari Park as part of the EAZA Endangered Species Breeding Programme.  This initiative is designed to expand and maintain healthy rhino populations, safeguarding the future of this iconic species. 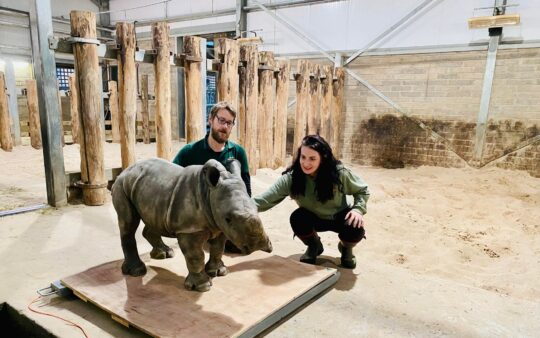